We’re on the home stretch of the 2020 election cycle and things are heating up. Newsweek recently published a Birtherism inspired opinion piece entitled “Some Questions for Kamala Harris About Eligibility | Opinion” which questions her eligibility to be on the ticket for the highest office because her parents were immigrants with an uncertain naturalization status at the time of her birth (on US soil). And President Trump fanned the flames by indicating that questions raised by a campaign adviser about the eligibility of Senator Harris to run for vice president were “very serious.”

I’m not going to provide the link -- but you can find it via search if you wish. The article received widespread condemnation for being flawed and racist and Newsweek later apologized and amended the article with their apology -- but they never retracted nor removed the original article online. Lots of banner ads and eyeball clicks drive $$ - something they likely don’t want to give up.

And here’s irony in this situation. The New York Times, another news media company, ran two strongly titled headlines to cover the controversy of the Newsweek article as well as Trump’s subsequent comments:

So, we see that according to the opinion of the NYTimes, the Newsweek article was clearly racist.

However, and this is the part that makes you scratch your head in wonder, NYTimes advertising banners show on the very Newsweek article which they cite as starting the racist conspiracy theory.

See screenshot from my mobile phone: 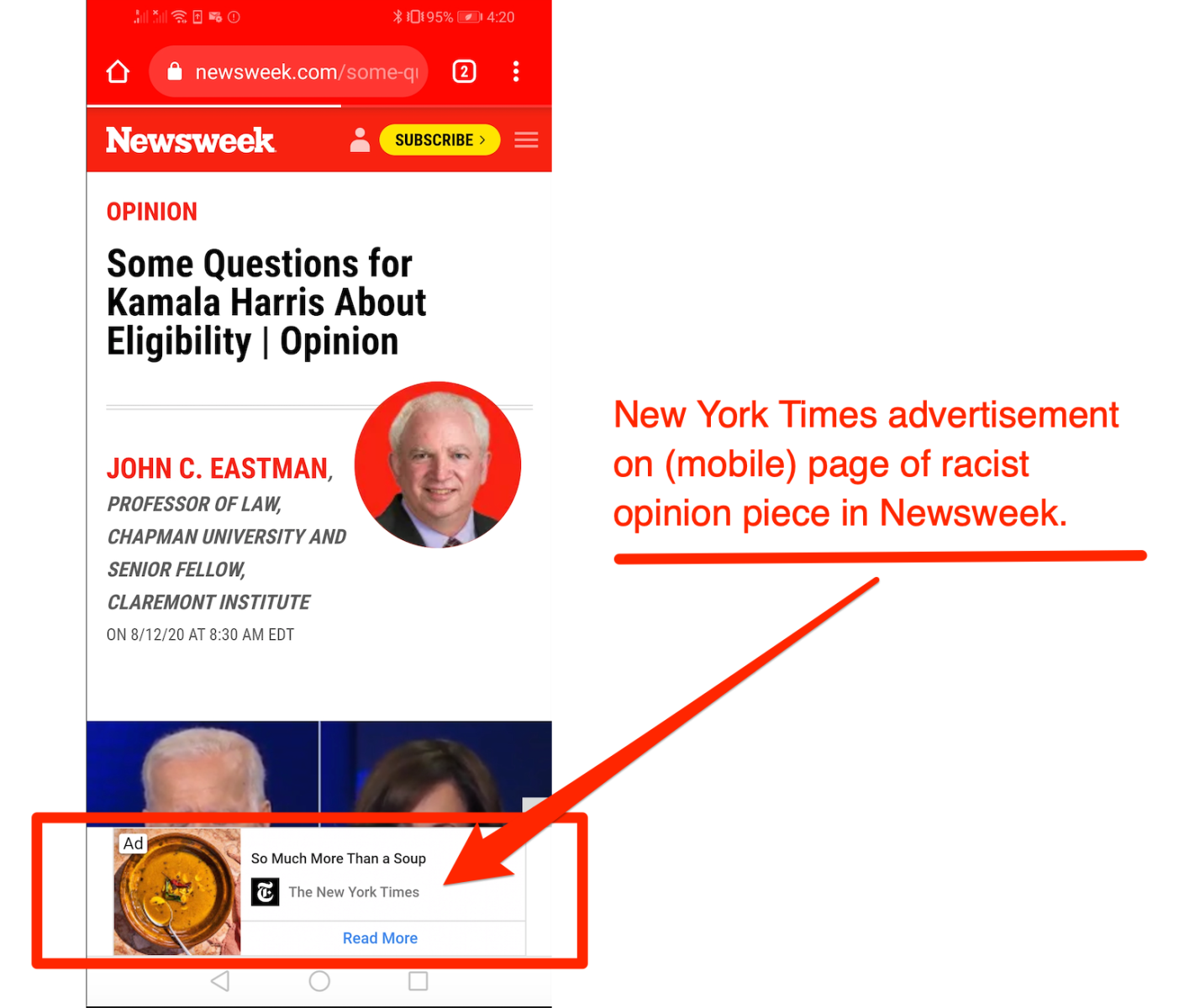 Does the NYTimes really want to be supporting content they’ve acknowledged as racist with their paid advertising? Do they really want to benefit from clicks on that ad from readers of that same content?

If we view source from the original page of the article, we see that Google via DoubleClick (a company they acquired in 2007 for $3.1 billion in cash) is the ad serving technology. You can also find Amazon ad serving code on the page although I didn’t see any Amazon ads served up, thus I’ll spare their name from the title of this posting.

It’s unlikely that the NY Times would buy this ad space unless it helped them convert some portion of those eyeballs into paid subscribers and / or traffic (and therefore, revenue). And of course, we know that Google, a super profitable company, gets paid when they serve up ads – and lots of them -- even when the ambient container may contain a racist opinion piece. Therefore, both these companies (along with the original publisher, Newsweek) are benefiting from continued distribution of this opinion piece that started the racist conspiracy theory. 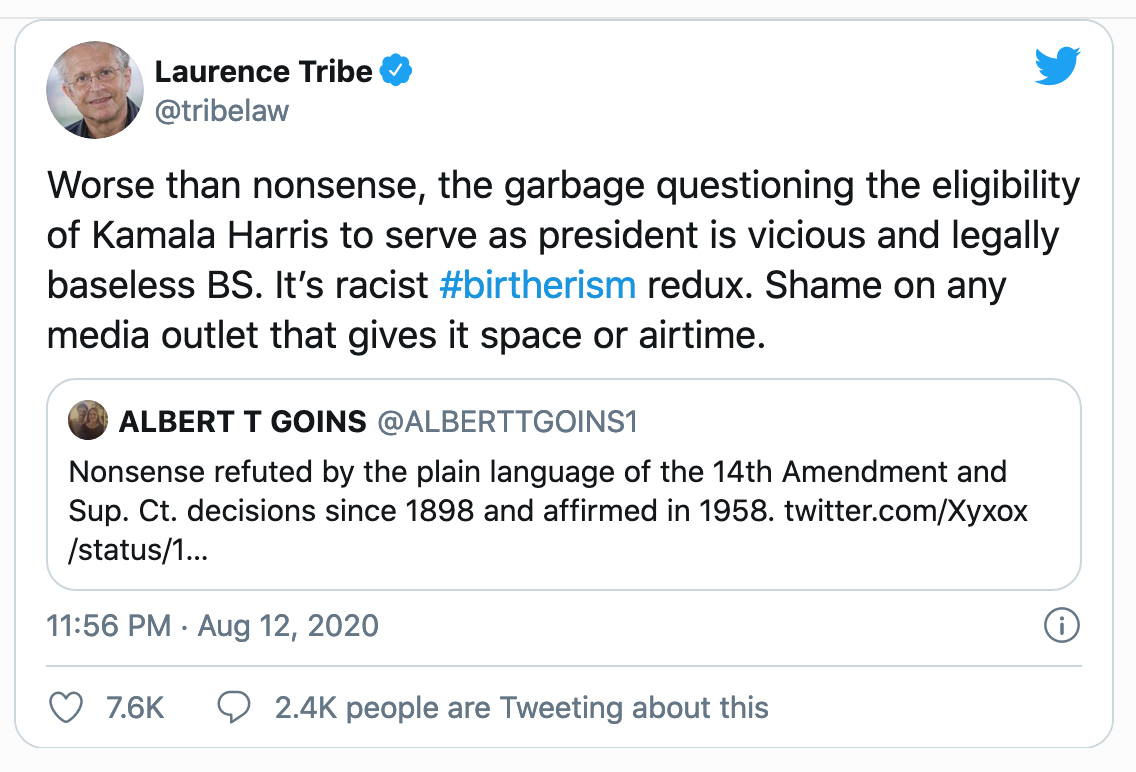 Earlier this summer, the #stophateforprofit campaign was started by thousands of advertising businesses as well as some of the most prominent civil rights groups and nonprofit organizations including the Anti-Defamation League (ADL), Color of Change, Common Sense, Free Press, LULAC, Mozilla, NAACP, National Hispanic Media Center, and Sleeping Giants.

The stated goal of the diverse coalition was to encourage another major actor in the world of internet advertising, Facebook, to take common-sense steps to address rampant racism, disinformation and hate on its platform. Advertisers agreed to pause all advertising spend on Facebook for the month of July. Basically, the coalition asked companies like Coca-Cola, Harley-Davidson, Levi’s, Patagonia, and other leading brands whether or not they wanted ads for their brands to show alongside content on Facebook pages that were associated with Hate and the answer was “No.”  (https://www.stophateforprofit.org/participating-businesses) So they agreed to pause their advertising and give Facebook time to make adjustments to their way of doing things. Unfortunately, according to press reports, the campaign didn’t result in any changes as Facebook refused to budge in making any substantive changes. 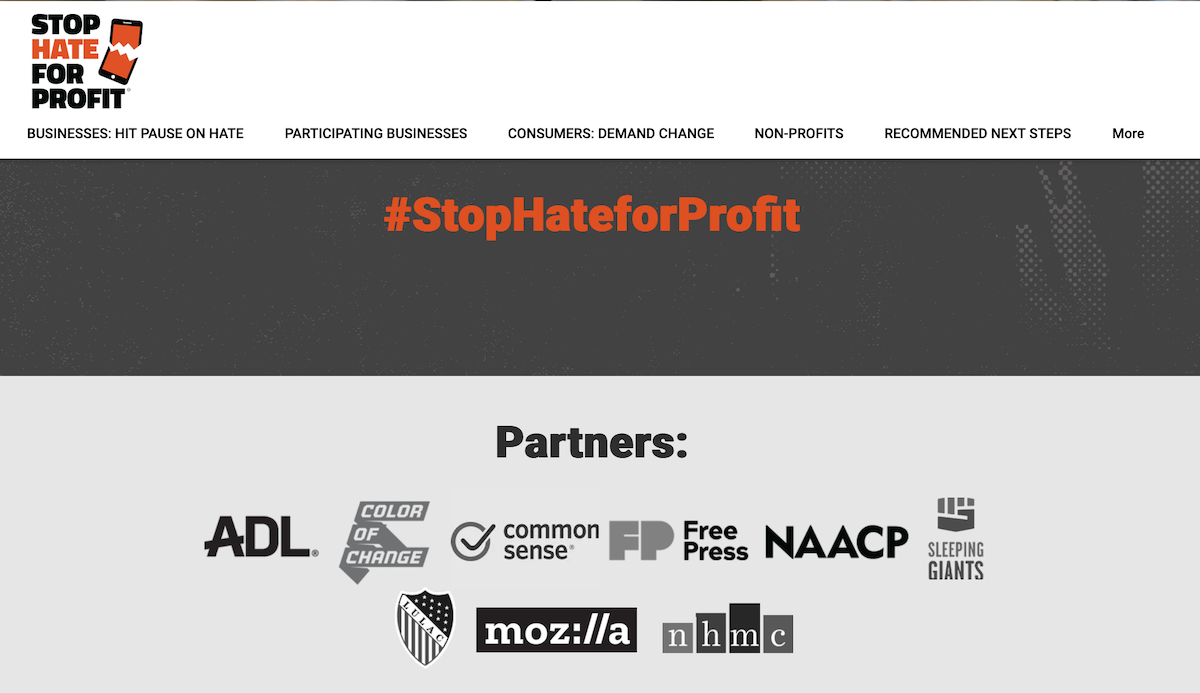 And while the Facebook platform is a leading offender and increasingly becoming a menace to society, we can see that they aren’t alone in fueling the problem. Most of the content commerce architecture of the internet is geared toward an impression-based and pay-per-click (PPC) business model that values efficiency and engagement above all else. Even when that engagement is driven by unmoderated, poorly moderated, or officially sanctioned content or Op-Ed pieces (Newsweek) that spread disinformation or spark conspiracy theories that are harmful to society.

Advertisers and media companies alike need to rethink their business models and consider how to engage with consumers in news ecosystems. Yes, the current structure can be very profitable for some of them, but the external costs on society in terms of spreading hate, division, and misinformation or disinformation are borne by everyone and are eroding the very fabric of these UNITED States.

With all the Big Tech hearings on Capitol Hill, it seems the left and right are united in wanting to see changes made and many will probably happen this year. Advertisers and media companies alike need to QUICKLY rethink their business models and find healthier and more sustainable ways to engage with consumers in news ecosystems.