Will Twitter’s ability to manipulate the price of bitcoin affect Square’s stock price and land Jack in a box?

The hype and near-religious fervor of bitcoin advocates continues to amaze me.

I imagine people are viewing bitcoin with wide eyes in the same way that people may have first viewed combustion engine cars when they emerged late in the 19th century. It was the later  introduction of Ford’s Model-T in 1908 and its incredible popularity that made construction of new roads a top US government priority by 1920.

Sticking with the analogy, Bitcoin is paving the way for lots of innovation by drawing attention to the application of cryptocurrency and blockchain in a variety of sectors.

And like the Model-T, Bitcoin is dirty and literally powered by mostly fossil fuels.  Every way that you measure it, Bitcoin’s intense energy usage is bad for the planet. For those unfamiliar, the bitcoin “mining” process uses 100+ TW of power each year (see real time update at: https://cbeci.org/) to solve complex computations to validate transactions and create new “coins” on the network.

You would have to drive an internal combustion car more than 150 billion kilometers to match the carbon footprint created in one year of mining bitcoin. To put that in perspective, it’s as much energy consumed as the country of Switzerland and the entire fleet of Tesla vehicles ever produced has only driven 61 billion kilometers.

It’s so much energy consumption that Elon Musk, a guy who knows a little bit about energy (and a former bitcoin enthusiast), reversed his support for bitcoin on May 12th with a Tweet that called Bitcoin’s energy use “insane.”

The price of bitcoin immediately dropped after Musk’s tweet which has earned him flak from the BTC true believers.

According to Dr. Larisa Yarovaya, a lecturer at Southampton university (UK). “It (bitcoin) should die for the common good of the planet and be replaced by a new model. It consumes more electricity than a country. All the rest is detail.”

Others have a vested interesting trying to greenwash the harms of Bitcoin. Ark Investments, an investor in Square, published a “white paper” that was touted by Jack Dorsey (Square and Twitter’s billionaire CEO) entitled “Bitcoin is Key to an Abundant, Clean Energy Future.” The white paper isn’t peer-reviewed, it is filled with logical fallacies, and it goes against the view of most scientists and environmentalist. It also doesn’t address the very real problem of today -- that fossil fuel consumption is spiking to supply the bitcoin network. 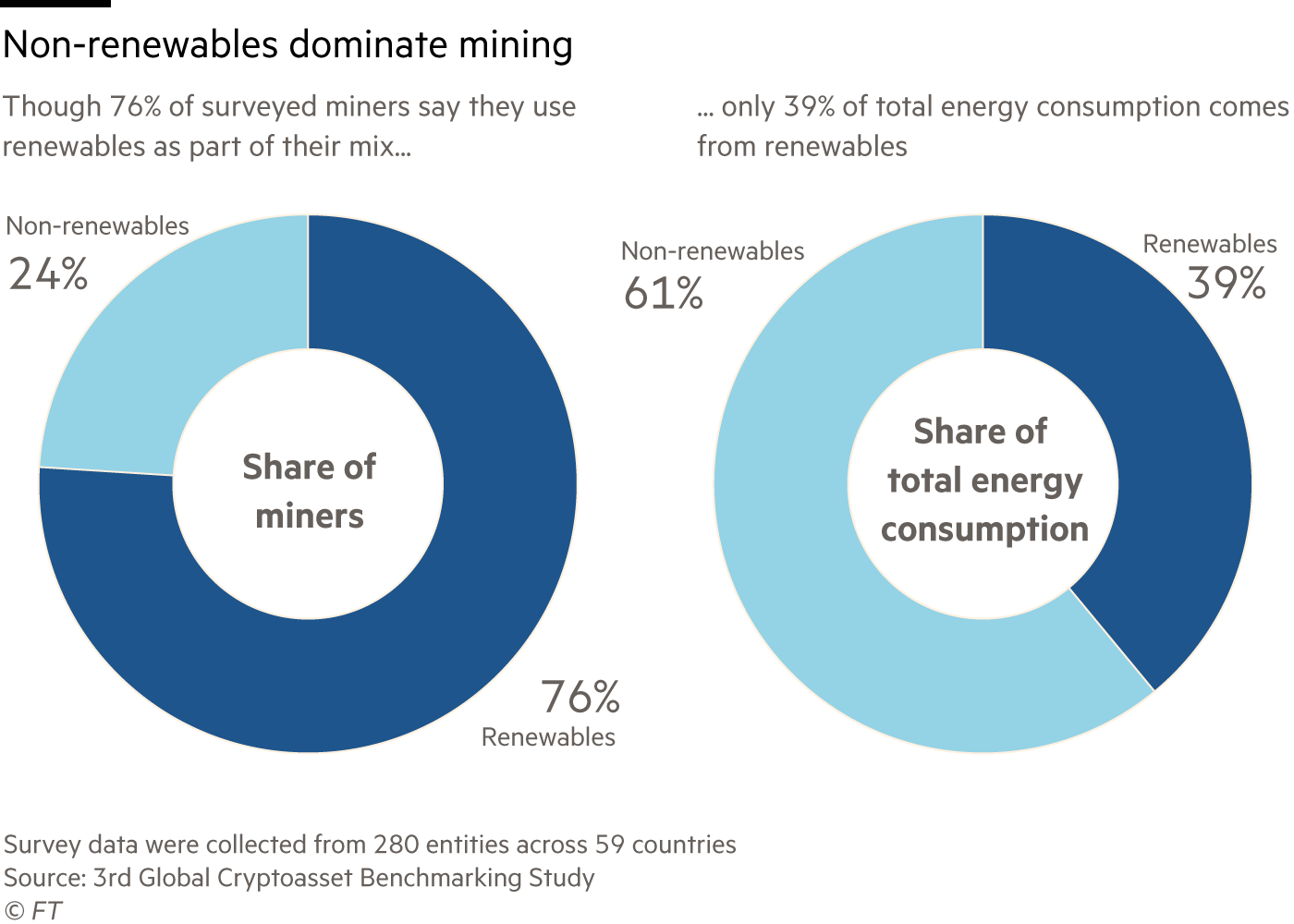 Jack Dorsey seems to take pride in his contrarian views and at a recent bitcoin summit in Miami stated, “Whatever I can do, whatever my companies can do to make [bitcoin] more accessible to everyone is how I’m going to spend the rest of my life.”

Like many people, I feel Jack is dead wrong on this issue:

But it really doesn’t matter what we think. It may, however, matter how the USG receives his comments and his subsequent actions.

This is how the regulators may look at things:

1: The CEO of Twitter, a company which amplifies content with opaque algorithms affecting just about everything Twitter users and the media see, has just gone on record stating that Twitter, along with his other company, Square (which has purchased $230 million in Bitcoin -- representing 5% of its cash and cash equivalent holdings), will do everything they can to promote bitcoin and make it accessible to everyone.

2: If Musk, a mere twitter user, can move markets up and down with his short tweets, imagine what Jack can do with his hands firmly on the control of the platform and the algorithms which determine which tweets will trend and which discussions get in into the public dialogue.

3: Jack can also use a rise or fall in bitcoin’s prices to manage Square’s profitability and therefore, the share price. Through opaque algorithms at Twitter, he can potentially manipulate the rise and fall of bitcoin’s price.

It’s not too much of a stretch to imagine Jack getting some probing questions from the Securities Exchange Commission (SEC) or from members of Congress during one of his future hearings.

Senator John Kennedy (R-LA): “Let’s get right down to it Mr. Dorsey, you are on record stating that you and your companies would spend the rest of your life making bitcoin more accessible to everyone. Is that correct?”

Jack Dorsey (CEO, Twitter & Square): "It’s an amazing asset, Mr. Senator, if I were not at Square or Twitter, I would be working on Bitcoin because I believe that …”

Senator Kennedy: (interrupts) “I don’t mean to be rude Mr. Dorsey, but time is limited. Can you answer ‘yes’ or ‘no’ on whether not you stated at a Bitcoin conference last June ‘Whatever I can do -- whatever my companies can do -- to make Bitcoin accessible to everyone, that is what I will do for the rest of my life.’

Dorsey: “Yes, I made that statement.”

Senator Kennedy: “Is it true that your company Square has spent $230 million on bitcoin which represents about 5% of Square’s cash and cash equivalent holdings in the form of bitcoin?”

Dorsey: “The price fluctuates with the market and I don’t have the exact number -- but I could have my staff get back to you on ...”

Senator Kennedy: “Is it true that in your company Twitter, you write algorithms that control what trends, what people see and what they don’t see?”

Dorsey: “We have engineers that write algorithms for the company and that ….”

Senator Kennedy: (interrupts) “But you’re the CEO of the company, correct?”

Dorsey: “That is correct.”

Senator Kennedy: “And these algorithms are opaque. The public and we lawmakers have no idea what is in those algorithms and how they amplify or suppress content for engagement.”

Dorsey: “We’re working on a new initiative called Bluesky which will help users select content moderation practices and the algorithms that affect them …”

Senator Kennedy: (interrupts) “But Mr. Dorsey, you’ve been working on that program for many years and there are small companies building social platforms that already offer their users 100% transparency into each and every algorithm that affects their account and that gives the user the right to opt out of those algorithms. In a Bill that I’m working on, I’m inclined to give those companies a pass as it relates to section 230 immunity but require large companies that deploy algorithms which optimize for engagement to be considered publishers.

So let me come back to a question, what prevents your algorithm engineers from writing a ‘pro-bitcoin’ algorithm that amplifies pro-bitcoin messaging just before the end of each of Square’s financial quarters?”

Dorsey:  “Well, that wouldn’t contribute to the health of the community and I imagine it could be a violation of securities laws so we wouldn’t do that.”

Senator Kennedy: “Are all your algorithm engineers also security laws experts? You’ve publicly stated that your companies will do anything to advance bitcoin which will directly affect Square’s stock price. How can you separate these roles Mr. Dorsey and your conflict of interest controlling a media company which influences the stock price of another company in which you have a direct economic interest?”

Dorsey: “That’s now how we’re organized so we wouldn’t do that. But I can understand that we, like many companies, are facing a significant trust deficit so we hope to bring transparency to our practices to help solve that problem.”

Senator Kennedy: “That’s a dodge Mr. Dorsey. You and all the other social platforms like Facebook, Instagram, and LinkedIn, have had many years and billions of dollars to make transparent all your algorithms and engagement mechanisms but you haven’t because it’s not in your interests to do so. At the same time, you are operating in a consequence-free zone with regard to what content you amplify or suppress and that’s something that my colleagues and I are working to address. When it comes to potential securities manipulation however, the rules aren’t so ambiguous so I expect that our colleagues at the SEC will be taking a closer look under the hood at the practices of Twitter and Square as it relates to the promotion of bitcoin. I yield the remainder of my time.”

This dialogue is hypothetical, of course, so you won’t find the transcript anywhere.

In a world where there are earth-friendlier alternatives to BTC (aka cash) and even cleaner cryptocurrencies, it makes you wonder if the loyalty to bitcoin is misplaced. Elon Musk folded his bitcoin cards but given the zealousness of other bitcoin advocates, I wonder if people at the top of the corporate world, like Jack Dorsey, could be the first casualties of increased regulatory scrutiny into the convergence of bitcoin promotion, algorithmic content amplification, and potential stock price manipulation.

Facebook is getting raked over the coals for the recent revelations about how they know their algorithms harm instagram users. Twitter also deploys lots of algorithms so I wonder if they will eventually come under the same scrutiny?

Well, it looks like Jack will be no more for Twitter. He can spend the rest of his ruining the planet by making the price of bitcoin go up (and watch the miners follow). Burning fossil fuels = bitcoin mining.